As OEM technology has advanced over the last century, peak horsepower and torque offerings have too.  Right now in 2021, Ford, Ram, and GM all offer diesel trucks with around 1,000 ft.lbs of torque right off the showroom floor.  All 3 also come with advanced emissions systems, automatic transmissions, high-pressure common-rail fuel injection, and a VVT/VGT Turbocharger.

Diesel performance technology at an OEM level seems to be driven by 3 factors.

We can't be positive if the Torque Wars that have been taking place for the last 2 decades is a very public pissing match between manufacturers or if consumers really need the dramatically increasing amount of power available in stock diesel trucks. Either way, diesel performance enthusiasts like us are the clear winners.

A part of the reason these huge power numbers are possible (while meeting emissions and reliability standards) is the leaps and bounds that have been made in turbocharger technology.  As previously stated, 6.7L Cummins, 6.7L Power Stroke, and 6.6L Duramax offered in 2021 include a Variable Vane/Variable Geometry Turbo.

As exhaust enters the backside of a turbo in the turbine housing, it pushes your Turbine Wheel.  For years guys have played around with how much space should exist between the turbine wheel and turbine housing.  Generally, this relationship is expressed in an Aspect Ratio (Aspect Ratio (AR) is the ratio of the area of the exhaust turbine inlet to the radius from the turbine impeller center).  What you really need to know is less space between the turbine wheel and turbine housing results in less time and energy that it takes for the wheel to start moving.  This directly impacts spool-up and the turbo's ability to manage Drive:Boost Pressure Ratios. 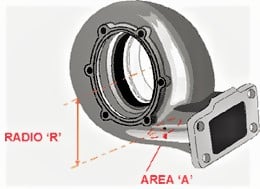 VVT/VGT's ability to dynamically change Aspect Ratio results in a turbo that can spool up quickly, adjust to any driving conditions, and maximize MPGs.  When you're towing up a steep grade through the mountains your truck has the proper sensors to detect elements of that situation and operate the turbo in a manner that keeps your truck as safe as possible while getting the best performance out of it.